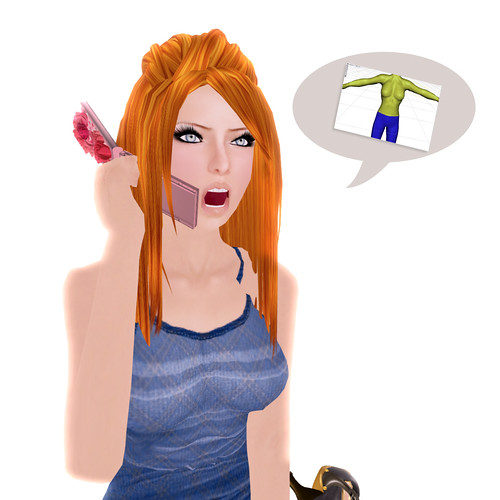 “…It has come to my attention that many of your poses bare a very strong resemblance to poses of other creators on FILOS and others throughout SL.”

“…He claims, he plans to make exact replicas of some of our favorite pose creators work and sell it for 1L.”

Here is my unsolicited opinion on the “issue”. Making poses is one of the many things I dabble in when I’m bored, just for fun. I make mostly static poses, and in my opinion, they cannot be copyrighted by themselves. If I make a stand, and someone else comes along and makes a similar stand, no content theft has occurred. Anybody is just as capable as I am of opening poser, qavimator, DAZ Studio or their animation program of choice and making WHATEVER POSE THEY WANT TO. It’s just human nature to be inspired by others we see and try to make our own or make it better. This is SL, you don’t have to be FIRST… but you can be better. Or even worst, it doesn’t matter as long as it’s YOUR OWN WORK. Am I alone in my opinion? I’ve decided to poll a couple of friends in SL to see their point of view. Posted below are opinions by friends who have decided to remain anonymous in their entirety.

Maybe I’m playing devil’s advocate here, but I find it hard to claim copyright over a pose that anyone can emulate if they have the right posing software. I can make poses myself and can create stands, sits, walks, and I would be miffed if someone accused me of copyright infringement if I decided to upload a sit with legs crossed. If we have the resources, why spend the 250L when you can spend 10L to upload something you posed yourself with full perms and creative authorship with it.

Dances, I would think may hold some weight. But a pose? A hug? A particular snuggling/sex position? Have we forgotten what derivative work means? Or should we start slapping the kama sutra book on posers too since they might on the chance, be getting their inspiration from there too?

Unless the actual bvh was hacked or copied, it’s not copyright infringement. i don’t even know if it’s possible to throw copyright on a pose. First of all, posing software was intended for renders and animations. Read that as pictures and films that I’ll just simply call “projects.” That static pose holds no weight unless it was rendered into an actual project. And even then the whole project is copyright, not that one element of it. Trying to lay claim on a pose anyone can interpret on several posing software is like trying to lay claim on the on the black dresses, the stiletto, hairstyles etc.

I mean by their rule of thumb then we can’t recreate any movement that may resemble theirs. But poses and anims aren’t meant to stand on their own. That animation is nothing unless a character dances it. That pose isn’t seen unless someone takes a pic with characters using it. And as far as mimicking advertising goes, do I have to say it? Advertising copies off and feeds off each other. If that’s an ad, it’s open to derivative work. And sorry, no one can scream copyright if you’re using the same black background and lighting that anyone with 2 cents worth of PS skills can do. Static poses determine nothing … if you want to really shine, make animations. That’s where it gets complicated.

For the most part, animators/posers in SL have it easy. Anytime someone puts out a creation in SL, there is a high level of risk with the potential of return. Anything you put out there as your own work is like that. For these pose vendors, you’re already putting something out there, an idea. And since you’re selling that idea, you’re enabling people to compound on that. Build on that. Derive from that. You get paid for the pose, you’re exposing that pose. And some folks will see it and go meh, I can make that myself. And that’s how it goes. You don’t hold rights on what people do with it afterwards. Unless they are outright hacking into the system to extract the bvh file and flipping that for sale.

Anon 2: well really you have to ask the question, how much ownership does a person have on anything in this game that emulates rl. Cell phones, blue tooth, pagers, etc are a prime example. Iphones. Materialistic items yes, but just give an example. Dig deeper, and you find that tattoos and clothing design is done similarly.

Anon 2: you can claim the work and the efforts put into it, the detail for the likeness of the rl version, but beyond that there’s not much

Anon 2: in a similar shade, there’s also the arguement held in rl over cologne and perfumes. A scent cannot be copyrighted. You can see 7 different bottles, each with different names, each different prices. Which is the best? The one who’s name you prefer. On some aspects the only possible way you can claim some things is by the weight the name carries

What’s your opinion on this?