I did web stuffs last night!

Avanista.com got a face lift last night because I was bored! Hopefully you guys like this sleek new layout more since it focuses on the entries and not the giant rainbow banner like before.

I've often wondered who reads my blog since about 1% of the people ever leave a comment. Who are youuuuuu? My biggest day this week was Tuesday, with 1476 page views! According to my average views that's around 34,000 views month! 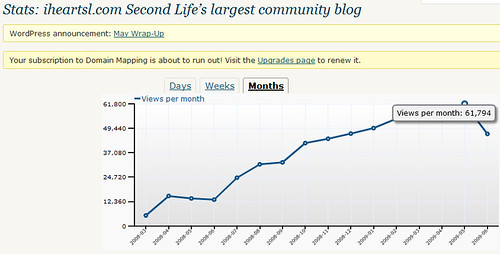 iheartsl.com does really well with 60,000+ views month, and that number has grown steadily since the beginning of the blog.

I know these are relatively modest numbers compared to other blogs out there, but I'm happy with them! 🙂