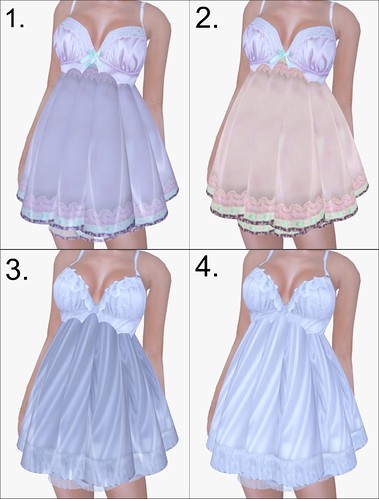 1. This is the CherryGirl CamicTunic (in Pink) that I purchased on February 12th, 2010. When I wore it, I noticed right away that the skirt prim did not match the shirt texture at all. At first glance, I thought it might have  been tinted “gray” so I sent the creator, kumichan Koba, an IM in-world asking her to un-tint the skirt.

2. Kumichan sent me an updated skirt, but she made it FULL-BRIGHT, which actually looks worse than how it was originally. The skirt still doesn’t match the top texture.

At this point, I thought that maybe her texture was the problem, or that she’s not understanding my concern. I’ve sent her pictures and even asked my friend to translate my note card into Japanese for me. I felt kind of annoyed/defeated when I didn’t get a response after waiting for nearly two weeks.

Today I went to find the CamiTunic to delete it from my inventory when I found another one just like it.. but in White!

3. This is the CamiTunic in White that I had purchased back in May 25th, 2009. The skirt didn’t match at all, but it was MOD, so I looked in the properties and discovered that the prims were not tinted gray at all, but it was set to LOW SHINE.

You guys know I think Full-Bright is the devil right? Well, shine is it’s cousin! EWW.

So then I adjusted the shininess to none and voila!

But seriously, why was the Pink version NO MOD, and why didn’t the creator replace mine with a no-shine version. LANGUAGE BARRIERS MAKES ME SAD! I didn’t know that it was set to ‘shine’, I had assumed that it was tinted gray like MOST prims before Windlight.

Anyways.. if someone can speak Japanese, can you ask Kumichan to send me a new skirt, thanks! 🙂

I might delete the Pink CamiTunic soon if I don’t get a replacement I can use.

Fashion, What I think