Two years ago when Windlight was introduced, a lot of people complained that it “broke their face light” because Windlight added a lot ugly shadows to the face that could not be corrected by simply wearing a face light. If you asked me back in 2007/2008 if I would ever leave home without a face light, I would say NO! Face light was my PRIM LASHES. It was necessary! and it worked!

So when Windlight “broke” everyone’s face light, some people embraced it and made nicer Windlight settings for their viewing pleasure, but lots of other people just wore even bigger and brighter lights, and in some extreme cases, full-body lights that lit up the entire sim. We’ve all seen it, and it is a complete eyesore!

My friend is a CSR at a well-known skin brand in SL and one of the biggest complaints that “newbies” have is that their skin does not look *exactly* like the pretty picture on the wall. Well, duh. A lot of new players haven’t grasp the concept of tweaking their Windlight setting, and some are defensive when you even suggest it! They think that the product should look *exactly* like the vendor’s image, and most times I would agree, but we all know that how you see a skin is dependent upon your hardware, graphics settings, and Windlight setting. It makes a HUGE difference.

I’m re-writing about Windlight because I received an email a couple of days ago, and a reader said that the skins she purchases (from seeing them on my site) does not look the same on her avatar. It makes me wonder if she’s viewing the skins on Midday setting, so I thought I would mention how to use Windlight settings again for anybody that might find it useful. 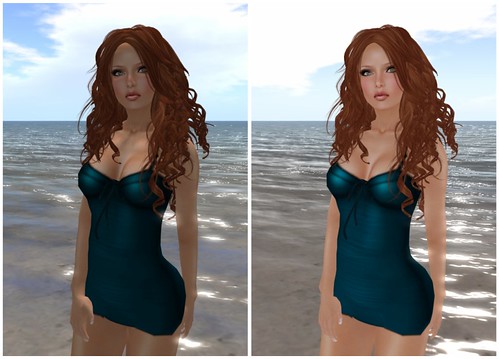 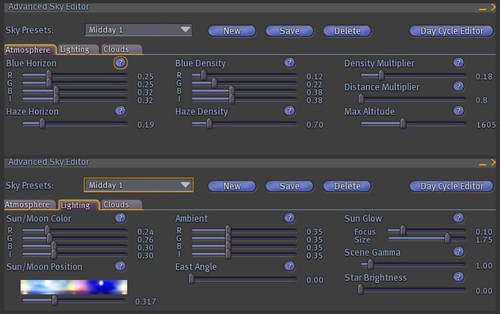 The Midday 1 setting is a default setting that can be found on everyone’s SL client. If you can’t find it, start with NOON — I think that’s the same thing. It looks pretty ugly, doesn’t it? 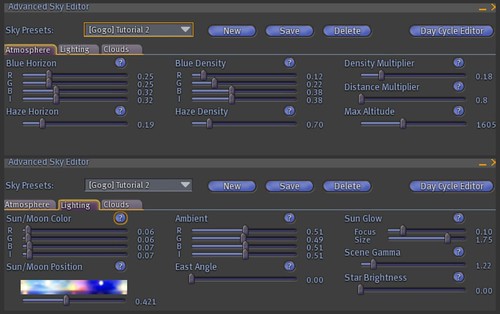 By tweaking a little bit, I was able to brighten the image. If you want to duplicate the result, just change your settings similar to the image above. I have only tweaked the Atmosphere and Lighting tab, and nothing else. 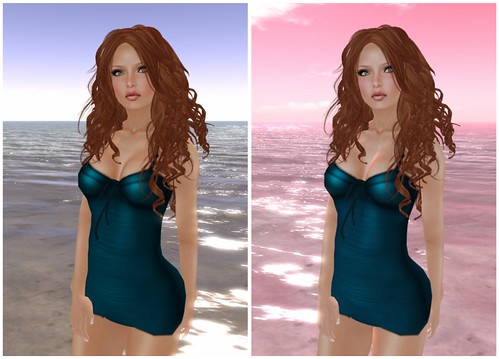 If you wanted to play with it a bit more, you can get really cool effects in SL without ever using Photoshop. I typically don’t PS any of my images, cos it’s way too time consuming. 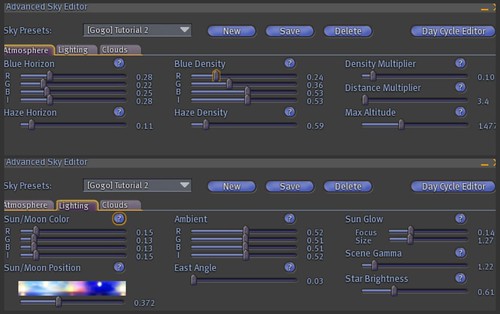 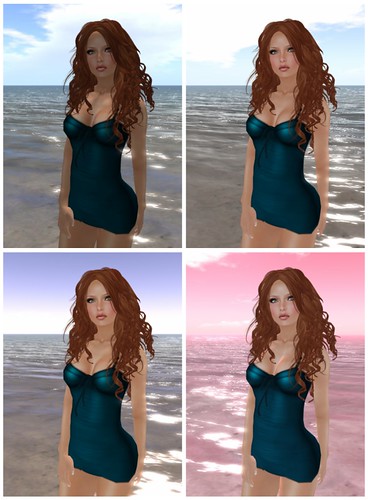 More information about Windlight can be found at the official Second Life Wiki.

You can also download tons of Windlight settings created by other residents here.