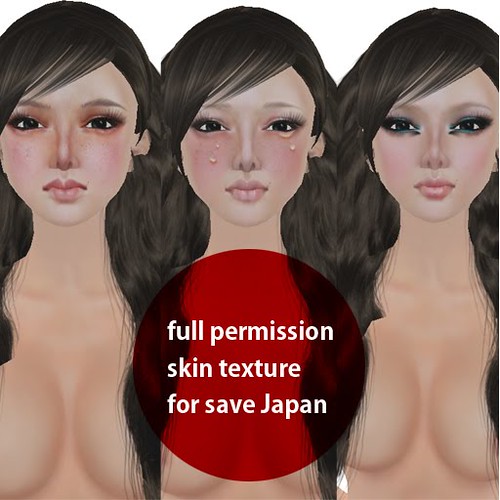 Mina Jun is amazing. I admire her so much for releasing her skin texture with FULL PERMISSION, to raise funds for Japan via the Red Cross. Read more about this at Mina’s blog.

The skin textures can be purchased for $0L at mina’s in-world shop.  You’ll have to open the texture in-world and “save as…” the file to your computer.

I think a bunch of people (myself included) begged Sasy Scarborough to revive her Another Fundraiser event and organize a way for people to use these templates and also Eloh’s, to create skins and/or makeups for charity.

I’ll update this post with more info on Another Fundraiser II later, but for now, you can get started on making something awesome!! 🙂

/EDIT: Check out the Another Fundraiser II website (March 26th – April 3rd) if you want to participate!!