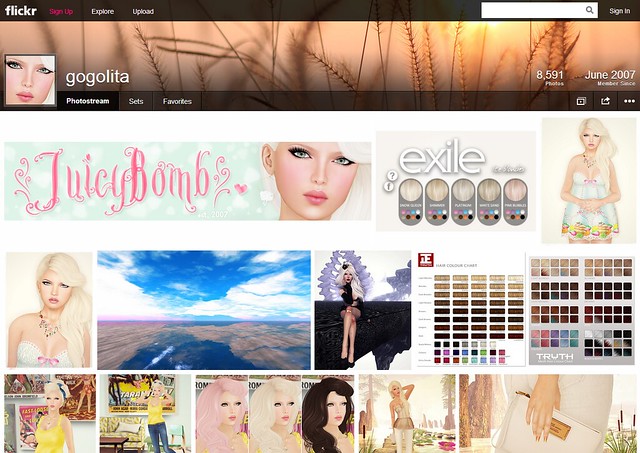 Flickr launched a new layout, new pricing plans, and lots of perks for free accounts! I’m a big fan of Flickr, obviously. I’ve used Flickr since June 2007, and it hosts all of my blog photos. Without Flickr, JuicyBomb would not be as awesome. I really enjoy the Second Life Flickr community, and being able to catch up on all the pretty SL photos in one place.

I’ve seen some people gripe about the layout; but I think it”s okay. Embrace change, you’ll get used to it. Being Second Life residents, we’re used to craaazy changes by now! 😀 I’ve learned to deal with drastic changes, that’s one thing that SL has taught me over the years. The new pricing plan (Ad Free, Doublr) is more expensive than before, but you don’t have to pay for it. The free account now offers much more than before, and is nearly identical to the old Pro Account perks.

Is 1 Terabyte enough storage space? Yes, probably. I have over 18,000+ photos stored in my Flickr account, but only about 8,000+ are public. The rest are photos that are unedited or photos I’ve uploaded to make collages. According to Flickr, 1TB is equal to about 500,000 photos. My account is turning 6 years old in June, and I would say that I take more photos than the average SLer, so I think that it’s safe to say, that 1TB will be just fine.

Why am I keeping my Pro Account, even though many features are now FREE? Cos there are still a few perks that are not available to everyone.

The old Flickr Pro accounts included unlimited storage space, and that means it can exceed 1TB.

Flickr Pro users also get to view counts and referrer statistics for their images. Lots of professionals often like this feature because it shows where a photo has been used or linked across the web.

Flickr Pro users can replace photos (without having to reupload), archive high-resolution original images and enjoy an ad-free experience.

Although storage and bandwidth are unlimited, they do come with a caveat. Flickr Pro users are limited to image sizes of 50MB and video sizes of 500MB. If you want to upgrade to the larger file sizes, you’ll need to convert from a Flickr Pro to a free account. (pasted from Mashable – The New Flickr: What it Means for Flickr Pro Users)

I looooove that I can replace a photo, and not lose all the favs and comments. I’m keeping my Pro Account, if I ever exceed 1TB, I can still keep the old $24.95 pricing, and not have to pay $49.99 for Doublr! Read this article (What The New Flickr Means For Free and Pro Users), they have charts posted comparing the old free account vs. new free acount.

Do you have a Pro Account on Flickr? Will you be keeping yours, or downgrading to Free? If you have a free account, how do you feel about the new perks (hopefully you love it, cos it’s awesome!).