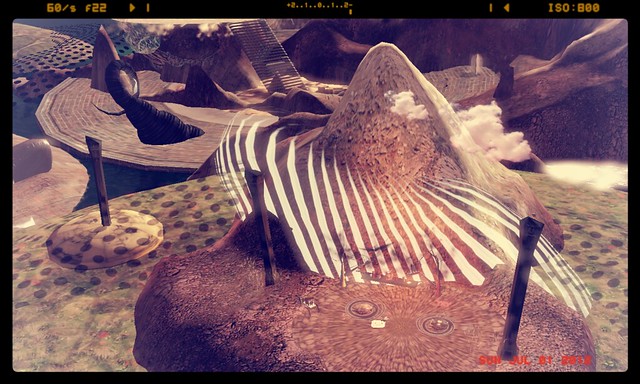 Listen–we need to talk. You aren’t going to be happy about what I’ve got to say. You probably have your defense ready and that’s great, I’m happy to have this discourse with you, but I would like for you to consider what I’m about to say first.

Yes, I love participating in LEA programs. I can’t praise the idea of allocating sims to artistic endeavors enough. But there’s something going on that I’ve noticed and needs to be addressed. Are you ready? Let’s do this.

There’s way too much self-importance and too little forward thinking in the SL art world. It isn’t groundbreaking enough, and focuses too little on the very culture that makes up this game. It doesn’t warrant the attention it gives itself, and is over-saturated with elements that ignore what the outside art world even celebrates about us.

Second Life is a place of unlimited potential. For a community of creators to miss the train on this again and again is a damn shame. This is a virtual world, where anything is possible, and yet most of the art produced and put on gallery walls are little more than selfies and headshots.

Yes–selfies are a valid point of work. Some artists’ entire careers cover evolving selfies. But this is something our art world is positively bloated with.  When you have an art gallery full of headshots from various artists and this is the best you can present to anyone, you know your industry is in trouble.

Exhibit A: Second Life has missed its own honorary party in the mainstream art and fashion world. When’s the last time anybody pursued some still life shots like this? Or this? That’s a serious callback to SL and our snap-to grids. When’s the last time you saw a virtual body of work like that? This is the kind of aesthetic we’ve seen with vaporwave, with past fashion collections, and nary a fuss was made on the grid about this at all. How? And why? When did we become so blind to what the rest of the world was doing that’s clearly inspired by us?

Exhibit B: Most of what is considered fine art and put on a wall is not fine art. Blogging pictures are great and can still be art, but that’s like visiting a gallery, expecting to see fine art, and seeing a bunch of Annie Leibovitz shots and no paintings. That’s what we have. A lot of Annie Leibovitz and Vogue editorials. Where’s the work commenting on the culture of the game, the administration, making fun of ourselves and talking about how we relate to one another? We can’t call ourselves a proper society until we have art like that.

Exhibit C: The best machinima artists are designers who have never had major participation with a LEA sim, much less the SL art world in general. We need to be trading more notes with each other, and this is one aspect I’m focusing on for the next six weeks to even learn more of myself. Machinima has got to improve, but there are definitely people willing to try that out.

Exhibit D: What’s with the drama? What’s with this? Are you serious? You guys act like thousands of people are going to your shows, because that’s the kind of egos I’m seeing pop up a lot. Tone it down, have a seat, and chill out. Let’s get somewhere better with our overall scene first, and then we can talk about how much bravado we should be sporting.

No, I’m not saying every artist is guilty of these things. But I am saying it’s the majority and it should start to change. Stop and ask yourself–what is this art I’m creating, and why? And then ask how we can push a bit harder to create something more thought-provoking.

artcriticismlinden endowment for the arts