Are my neighbors lagging me on Bellisseria? Yes, the more densely populated a region is, the more chances of lag increasing due to scripted objects running on the region and nearby avatars causing you lag. I’ll write a blog post about Avatar Rendering Cost sometime, but I don’t find other avatars to be a problem since I don’t render them. However, since I am living communally on Bellisseria, I do care when my neighbors are using an excessive amount of scripts on their land and increasing lag for everyone on the region. Find out what causes lag and how to reduce lag on the official Second Life wiki.

How do I check script info? Go to World -> About Land -> Click on the Script Info button. You can check script info on your land and see every scripted item listed, and the total memory used. You can even check public Linden-owned land if you’re curious how much script memory is used on public land. You can even check your neighbors’ land (though you won’t see a list of items), it’s still handy in case you need to report them for excessive script usage.

Here’s a snapshot of the Script Info on my land. I sorted all of my scripted items by size, and most of the items with the highest scripts are in my kitchen. I will some day go through all of my stuff and delete all the coloring scripts, cos I don’t need to change color once I pick my favorite.

Did you know that you can report people for using an excessive amount of scripts on their land? My friend discovered that her neighbor uses nearly 30,000kb of memory, and sent an Abuse Report about it. I read somewhere that residents are encouraged to report parcels with excessive script usage. What is excessive? I checked lots of parcels around my home, and most people are between 5,000kb and on the very high end, 20,000kb. If you see anything higher than that, it’s probably fine to AR and have Linden Lab check it out.

Side note, did you know that Second Life residents on Bellisseria are deeply offended when you AR them? I have noticed that it never fails, once someone has a thing or two returned, they leave their parcel soon after. It’s a good way to get your offensive neighbors to move – report them!

Here’s an analogy from my friend about region script usage.

“If a region is like co-op farmland, and memory usage is like water, it’s okay if one farmer is hogging 20% of the water, and others only use 2%, as long as everyone still gets what they need. But if the water starts running thin and some crops start wilting, that farmer using 20% needs to let more go through to the other guys.”

Back in August, I wrote some laws to being a good neighbor, how many of them do you see being violated by your neighbors? I have decided to append to this list with some new laws for reducing lag!

Do you know how to reduce lag on Bellisseria? Follow these laws, written by me.

Let me know in the comments if these tips helped you reduce your own script usage or pass along this info to your neighbor with an excessive amount of scripts running. 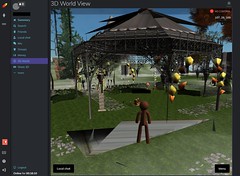