Elle as a Fashionista Elf

Elle the Elf – has a nice ring to it, eh? I used to Role Play quite a bit of Second Life before my long hiatus. As of late, I have thought about dipping my toe back into the Role Play pool. But this time I want it to be ultra fantasy – high fantasy even. I want to immerse myself in a world of elves, faes, magical beings, etc, and so on. You might wonder, where did all this elven inspiration come from? Well, my friends, it came in the form of the somewhat off-beat Lelutka release knowns as “Prim”.

“Prim” has created some chatter on the grid and who is “Prim” exactly. Is she a child? Is she a Doll? I argue she is neither. Prim is a fantasy face and anyone who has immersed themselves in any sort of Fantasy MMO or RPG will know exactly what I am talking about.

From the “Bosmers” of Elder Scrolls Online to the “Shai” of Black Desert Online or even the “Lalafell” of Final Fantasy, diminuitve races who are very much adults have played a significant role of lore and world building for as long as I have loved fantasy. But will my “Prim” be accepted by the Second Life Role Play world? Who knows…but I will certainly let you know what happens! 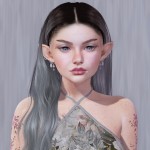