They say you can never go home again, except in Second Life, where you can! In late 2019, I had a houseboat for a short time before moving on to another shiny new theme. On a whim three years later, I rolled the same houseboat again! This time, instead of the Eveningstar, I chose a different model, the Wallower.

My feelings about houseboats have largely remained consistent over the last three years — they were one of my least favorite themes. I don’t have a houseboat very often because I don’t like the colors or the crowded feeling. But every now and then, I come across a location that I find so appealing that I end up staying for a while. This is true of my current houseboat.

END_OF_DOCUMENT_TOKEN_TO_BE_REPLACED

My Attempts to Keep Up with Blogging…

As the title says, trying to keep up with blogging is hard! I have so much to photograph, so much to say – but not enough time in the day to do it. Damn that RL of mine!

END_OF_DOCUMENT_TOKEN_TO_BE_REPLACED

Do you know what a 21 year old looks like? Sometimes an avatar created by a younger user is told they look too young, according to those who are older.

This group of people disagreed on the issue, due to generational differences of their perception of a woman in that age group. True, the thread had factors such as the sim owner being able to impose whatever rule they wanted on their land and who was allowed there. This, however, is not about the sim owner’s prerogative. It’s about how users in Second Life consider young adults and what they think they actually look like.

I think many times in Second Life, we disagree about what a young adult appears as. We all grew up during different decades, and our heyday has given us an implied bias. For me, the picture above is what I think someone who’s 21 can look like. She’s following an e-girl trend (though not all do), and is willing to try a lot of different wild trends because she’s got the money and freedom to do so. I, however, am a Millenial. Maybe you think differently about this than I do.

What do you think the answer is? Take a picture, post a blog, tag it on IHeartSL with “21Challenge”, and let’s see the results! I want to know the answers others come up with.

Do you like my outfit today? As soon as Neve announced this new release, I ran to get it! Grime and Grit are a respective top and shorts set that makes me feel like it’s the 90’s again. Not that the 90’s were a particularly great decade for me growing up, but sometimes it’s fun remembering the fashions from back then. You can grab this set from Uber.

END_OF_DOCUMENT_TOKEN_TO_BE_REPLACED

Hello from the NYC Christmas sim*! This place is GORGEOUS. It took a million years to rez, but it was worth it.

*Before Bellisseria, people called them sims. Half sim, full sim, quarter sim, etc. Then Patch Linden corrected everyone and said that a sim is actually called a region. So now some people started calling them region. I’ll use both words on my blog, depending on the sentence. For some reason, sim just flows here.

First things first, when I go to virtual NYC, I get a hot dog. Here I am buying a hot dog from a mesh person, and standing next to another mesh person. I actually like them here, they’re dressed appropriately and every mesh person has a role on the sim. Elsewhere in SL, they’re creepy.

END_OF_DOCUMENT_TOKEN_TO_BE_REPLACED

And so it came to pass after the lands of Juicy faded away in favor of nicely built houses, and the Mainland slowly became more barren, a new land rose up out of the depths of metaverse seed grants. It was fairer, and its people with new bodies milled about to create and speak to one another. They spoke of VR implementation and a Steam store page–

Today I’m taking a look at Sansar, lovingly referred to by SL citizens as “Second Life 2.0”. I took a look at the game because my other friends on Plurk were kinda scared to, so I volunteered to step up and poke around. Yes, that was really a conversation on Plurk and I said I would go on behalf of everybody. So! Here I am, back from my trip and writing about it.

Before I begin, let me state that what I write here is my impression of the game. If I missed a fact or got something wrong, then that’s the fault of the user experience I received. I’m just going to present what I know.

END_OF_DOCUMENT_TOKEN_TO_BE_REPLACED

Why is it that whatever I say sometimes causes so much fuss? A couple of weeks ago, I compared VRChat‘s avatar grading system to Second Life’s avatar complexity numbering, stating that we should adopt grades instead because it’s simpler for users to understand.

But Second Life likes to play the telephone game with re-quotes and paraphrases. Soon, my suggestion morphed through other mouths and turned into “I want us to pare down our avatars to Ruths”, and that’s not what I said at all. Do people read around here? Do they just like being outraged over things? Make a little cash with clicks in the process?

In an effort to retain my goal of an ultra-chill summer, I took to the seas of the Bellisseria continent to invest in deepwater fishing. And while I’m here, let’s do that “VRChat versus Second Life” comparison. We’ve already gone halfway with it. Why not take the whole kit?

END_OF_DOCUMENT_TOKEN_TO_BE_REPLACED 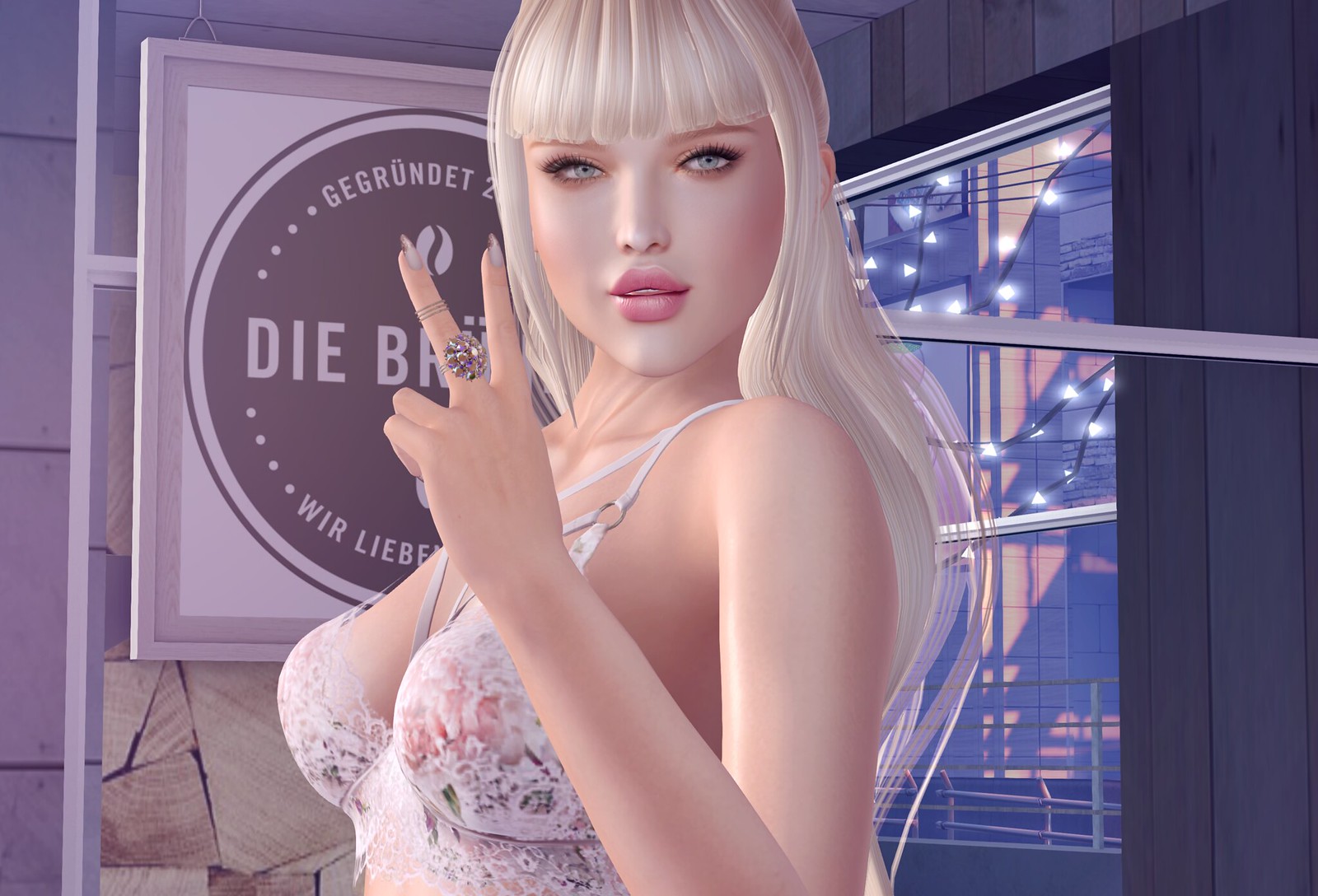 Merry Christmas Eve! I am exploring the Mopire Tokyo Subway Station, it’s modeled after a real life subway station in Japan. I could take photos for a whole month on this sim and all the photos would look different cos there are lots of cozy places and cafes to explores, in addition to the subway station. 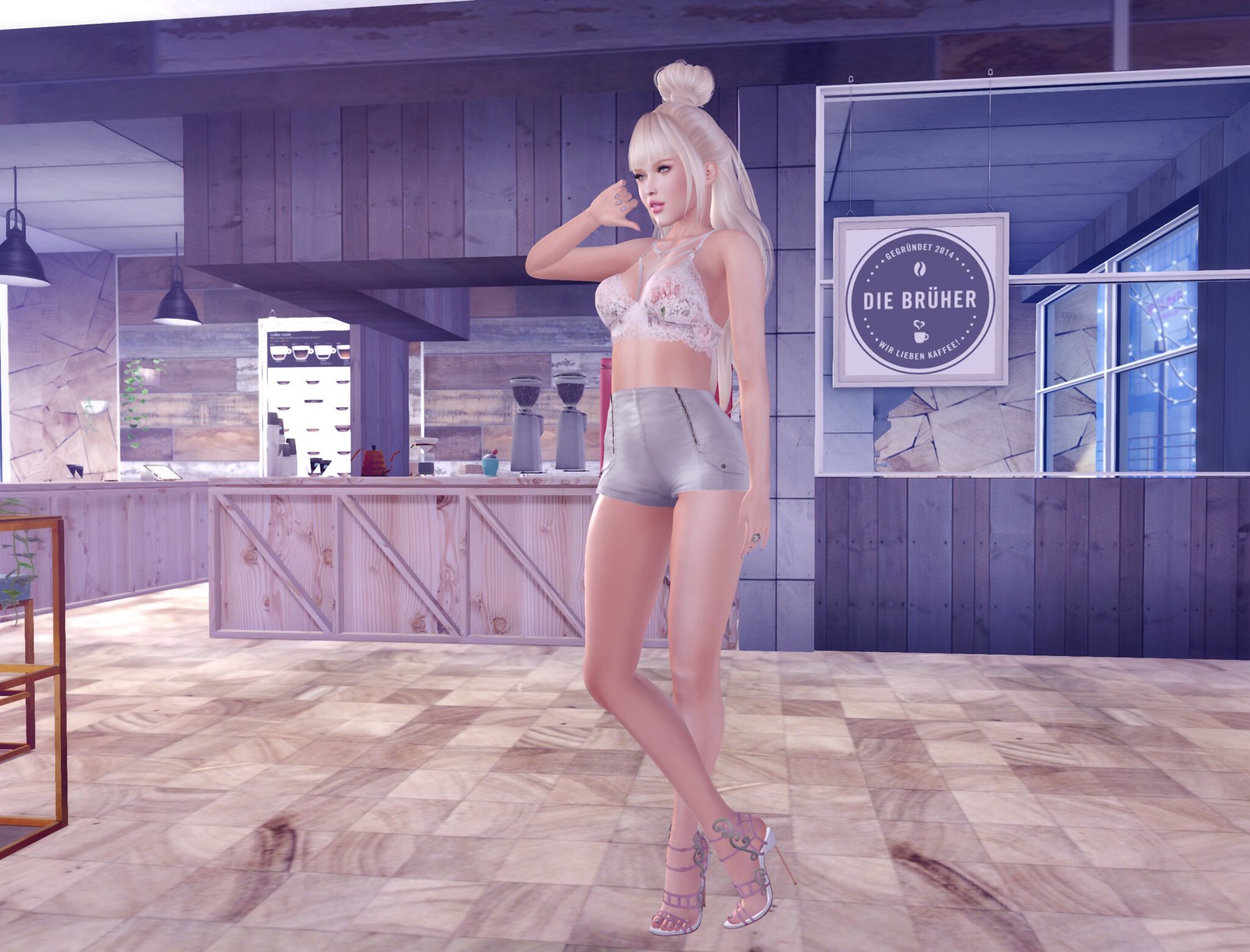 I love my outfit today! Everything is from Ricielli, which is sort of one of my favorite brands in SL. I’ve said that before, right? I think they do sexy-casual clothes really well. The Rhea Sandals that I’m wearing includes a color-changing HUD to change all components of the sandals, so I was able to match it to my outfit perfectly. 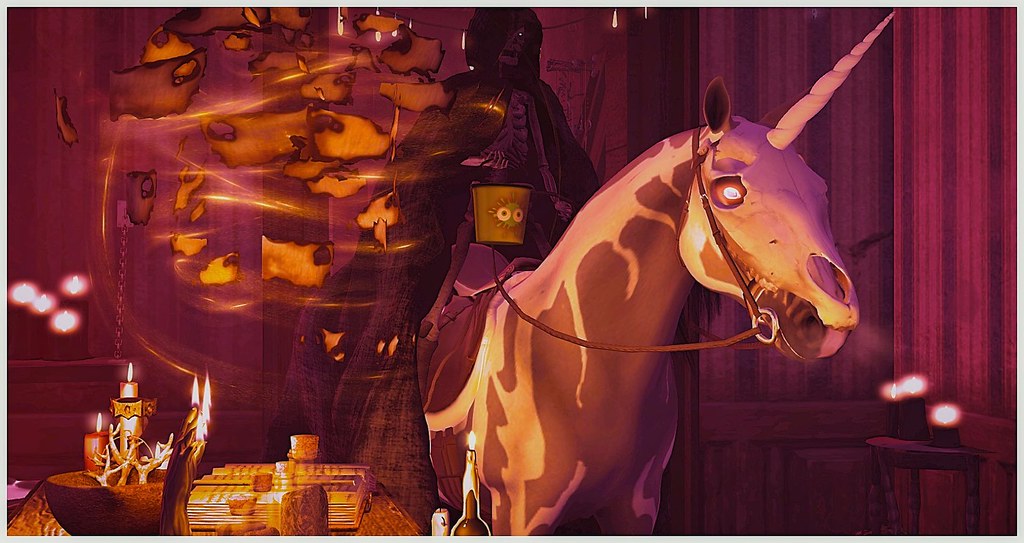 This morning I was stalking around Havenhollow as a nazgul. Did you see me? I dressed up my WH Riding horse with some spooky skins and decor, and tossed on a rider’s cloak from Jinx. For fun, I also wore RC Cluster’s new Trick or Treater bucket. I guess my nazgul’s searching for more than just a ring this time.

Lord of the Rings is one of my favorite books, so I’m absolutely pleased to run around SL as a nazgul this week. If you see me, just let me know where Baggins is, okay? I just wanna talk with him for a second. 😂 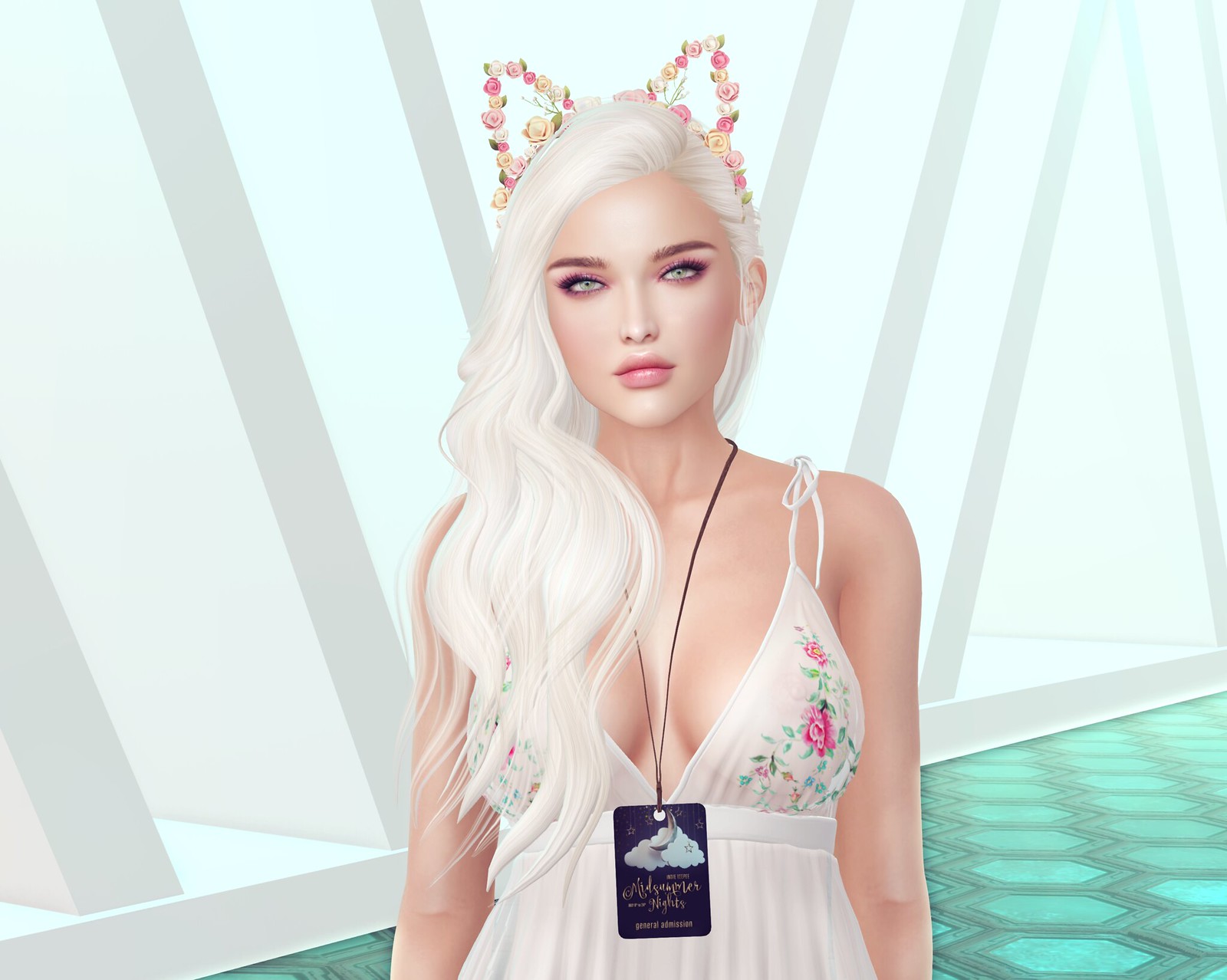 I am going to rave about Indie Teepee, even though I’m not a social butterfly. I initially found out about Indie Teepee through one of the designers that I follow on social media. I went to shop, but it was delightful that it is not the focal point of the event. Even though it is just one sim, it feels much bigger, and the shopping area is hidden underwater in a very nice under-the-sea themed area.

Just as SL is a home to so many people from all walks of life, Indie Teepee aims to be the roof under which these same people may discover, enjoy and appreciate the diversity and creativity that could only previously be experienced in the real world. 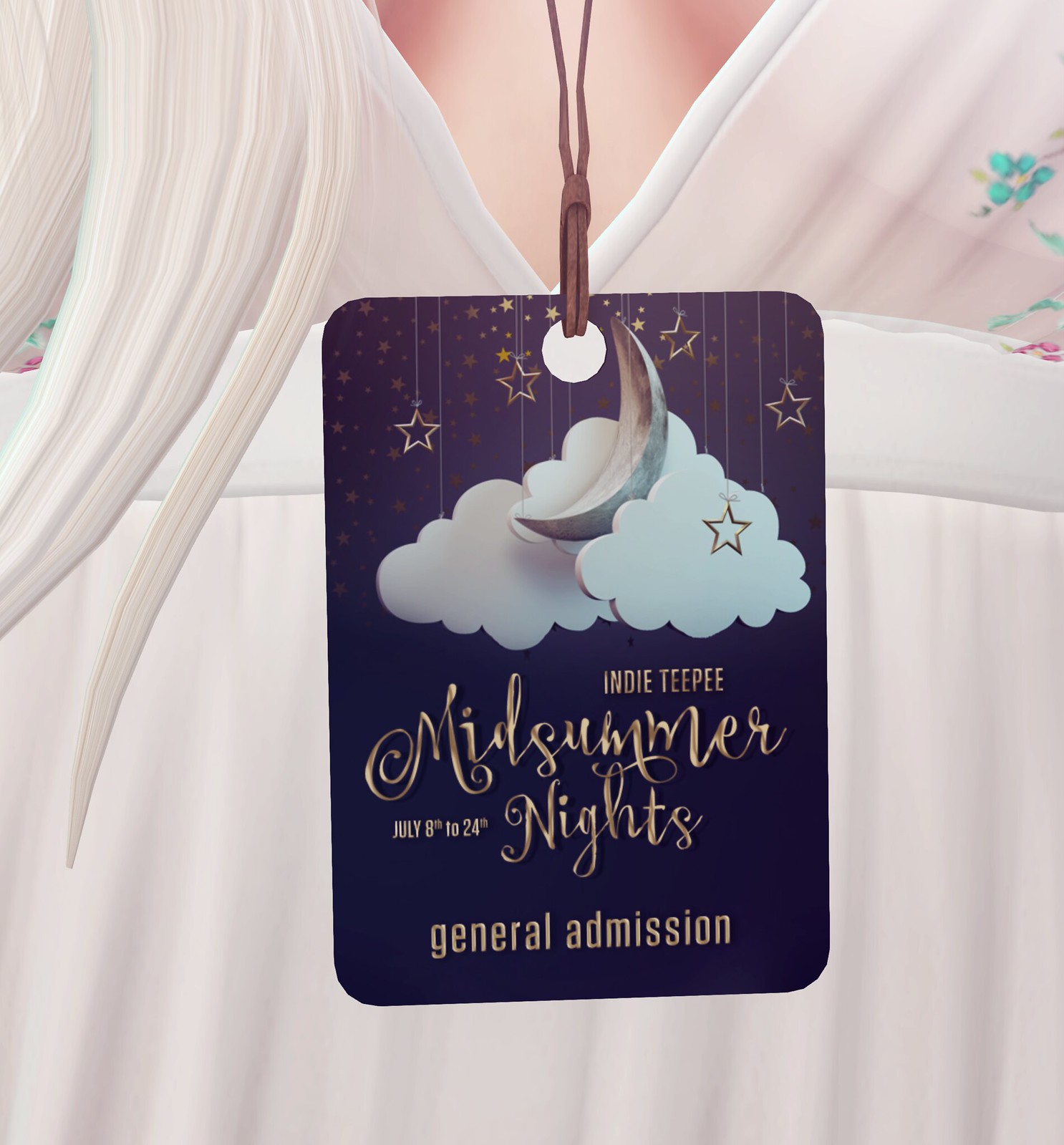